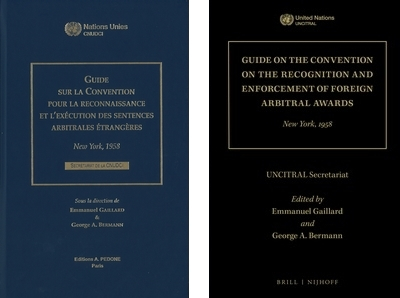 At the Paris conference on the New York Convention in September 2017, the publishing house Pedone presented the French hardback special edition of the UNCITRAL Secretariat Guide on the Convention on the Recognition and Enforcement of Foreign Arbitral Awards, 1958 (the “New York Convention”) edited by Professor Emmanuel Gaillard, head of Shearman & Sterling’s International Arbitration Group, and Professor George A. Bermann of Columbia Law School. Last July, the publishing house Brill announced the publication of a hardback special English language edition of the Guide.

Work on the Guide commenced in 2010, when UNCITRAL commissioned the assistance of Professors Gaillard and Bermann as part of its efforts to promote wider adherence to the text of the New York Convention as well as its uniform interpretation and effective implementation. The final version of the Guide canvasses the richness of the national case law on the New York Convention in an objective manner by analysing the judicial interpretation and application of each of its provisions by reference to case law from over 45 contracting States.

The Guide was officially presented on July 7, 2016 to the forty-ninth session of UNCITRAL held at the United Nations Headquarters in New York. At the same session, the Commission was also presented with an updated version of the www.newyorkconvention1958.org website, an interactive online platform developed by UNCITRAL, Shearman & Sterling and Columbia Law School. The website is the product of a coordinated effort to create an interactive online platform that makes information on the New York Convention publicly available. It provides free access to more than 1,700 cases from a wide number of common law and civil law jurisdictions, and also includes more than 100 English translations of those decisions.