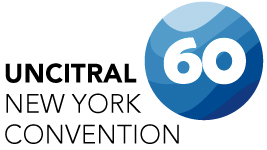 The Secretary of UNCITRAL and Director of the International Trade Law Division, Office of Legal Affairs, United Nations, Anna Joubin-Bret

10:30 am – 11:45 am, Moderator: Anna Joubin-Bret | Developments and Contribution to SDGs – Coordination and Cooperation

The New York Convention Guide and the “newyorkconvention1958.org” web platform, their contribution to the 2030 Agenda for Sustainable Development and to international law - Yas Banifatemi

Coordination and cooperation for the promotion of the Convention, its interpretation and application - Round table, including interactions with delegations:

The Mauritius Convention on Transparency, a key step in a reform process, Salim Moollan.

Organized jointly with the ICC, in cooperation with the IBA and the NYSBA